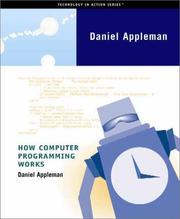 I found this is an odd book. At the end of the book the author describes this book as somewhat akin to a child's book for learning the alphabet. I think there is some truth in that description. It is not a book from which the reader will learn how to program, however it is a book from which someone might learn the rudiments of what programming is. I am a little dubious because the author wanders all over the scene and I think you need to be pretty intelligent to make sense of some parts of it. An added problem is that the author tends to make overly general statements such as '

Declaring a variable causes the language to allocate space for a variable in memory and lets you define a name for that variable. It also specifies the variable type so that the language can detect mistakes such as attempting to add a string to an integer.

Note that strictly speaking there are several errors in those two sentences. The author has confused 'declare' and 'define', he also assumes that all languages have fully typed variables (Python is a counter example that immediately springs to mind) If the reader is just satisfying their curiosity as to what programming entails that kind of flaw is not that important, though qualifying statements like writing 'most computer languages...' would avoid presenting misinformation.

I think this book is very much for the reader with an enquiring mind but no real intent to do more than get an overview of what programming is about. Taking that into account, I think some of the technical information is a bit over the top. Next time someone is bugging you to explain what you do, suggesting they read this book might fill the bill. But be careful to warn them first that the author has a tendency to be imprecise in his attempt to make a complicated subject easier to grasp.