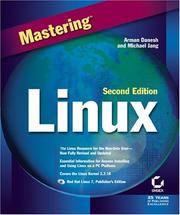 A better title might have been 'Linux Bits and Pieces', or 'Introduction to Linux'. Under no circumstances will reading this book create masters of Linux, not by a long shot. It tries to be all things to all men and probably ends up being master of no trade (forgive the mixed metaphor).

Whole chapters are taken up with topics that are completely general to Unix; working with files, su, tar, cd, ls, etc. These are more than adequately covered in the online man pages and in a plethora of other Unix/Linux books. Other chapters, for example on X11, need whole books to do justice.

My main criticism is towards a general air of optimism and 'isn't it all so easy using these super-glitchy GUI interfaces!'. The expectation is that Linux will install straight out of the box and all will be rosy in the garden. After struggling for over two years now with Linux from a couple of suppliers, I have learnt that it just isn't that easy. Linux has still a long way to go. Yes, it might install OK right out of the box, but fails on the next reboot. Try installing Linux on a Notebook. Try to improve on the XF86Config file. Try setting up sound or a scanner. Then things get tough and when things get tough the glitchy GUIs prove largely useless. Ultimately they are just not part of the Unix philosophy. Under circumstances like these, sleeves have to be rolled up and the text editor vi becomes the 'general Linux configuration tool'!

These authors seem to deny all this. They also fail to emphasise how crucially important it is to be familiar with Linux newsgroups and the support role they play. Reading these groups and being familiar with the etiquette there is essential if one is to get beyond the elementary stage of Linux exploration. Likewise they fail to mention some of the more useful web sites (www.freshmeat.com) and Linux Step by Step sites (

Also, differences between the various Linux flavours are glossed over. (Examples are based on Red Hat and the accompanying CD features a stripped down publisher's edition of RH 7.) They seem to imply that the poor unfortunate is going to be locked away in a dark room with nothing but this book, a slick Linux installed and a mouse. It is the support given by the Linux community that makes it all so fascinating and in the end, so much fun.

Having said all that, for someone starting out to explore Linux it might be a just-about-good-enough introduction. Sometimes it is comforting to have a printed reference text to hand, but I suspect that once parked on the bookshelf this one is quite likely to stay there, taking up 55mm of space.