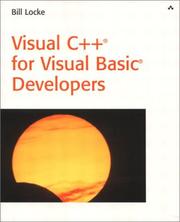 This book briefly introduces C, C++, and C# comparing their syntax and keywords with Visual Basic. Clearly, a 420-page book can only give some initial pointers to these three languages. Its aim is to allow VB developers to write C DLLs and ActiveX controls using the ATL with Microsoft's Visual Studios 6 and 7, as well as giving a small summary of C#. It succeeds in this aim.

However, the lack of details may prove frustrating for the reader. The first chapter provides a history of VB. The C chapters focus on problems with casting between numeric types, give details on various pre-processor directives that may put off a novice and show how to build a C DLL that can be used in VB. Nicely, however, code fragments comparing VB declarations of basic types are given side by side with C declarations to familiarise the reader with keywords and syntax.

The C++ chapters introduce classes and function overloading. Since no mention is made of templates, the section on using the Active Template Library is simply written on a need to know basis, and so the code listings contain many elements unfamiliar to a reader who only knows VB. In addition, it is not until these chapters that we get a whole code fragments that will compile and do something independently (rather than needing client code). Most include void main, rather than int main, and one uses printf to write an output - something that would be better placed in the C chapters, rather than a quarter of the way through the book.

This book is OK and will allow a VB developer to write some add-ins in C and C++, as well as giving an overview of C#. However, it only provides a brief introduction, and further reading would be required for a more thorough understanding.