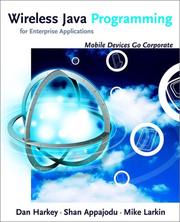 Ever felt overwhelmed by acronyms such as CDMA, GPRS, i-Mode, 3G?

I found this book to be a pretty good introduction to the Java wireless world, as it covers most technologies and platforms found in the field.

Unfortunately, its strength happens to be its weakness. Trying to span every single topic looks like an over ambitious goal. The result is a book that serves as a good introduction for the novice, but lacks of detailed information for the professional.

The book is organized in four parts. The first part is an overview of wireless foundations - aiming to the beginner - which gives a general idea to protocols, operating systems, cell phones, pagers and J2ME (Java 2 Micro Edition).

The second part is less general, and covers wireless device programming, such as the MIDP, VoiceXML, WML and JavaCard. Even though the authors assume you have at least a basic knowledge of Java programming and markup languages, the level is not at all exhaustive.

At last, in part three the authors cover enterprise applications with J2EE, introducing a nice application example: a campus room finder. This application will serve as the grand-finale of the book. In part four, topics such as security, transcoding and personalization are discussed using this application.

All in all, a well-written book, differing from most introductory books by covering more than just J2ME.