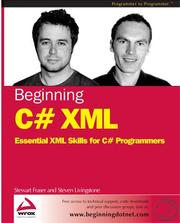 One of my next tasks at work is to extend an application I am working on so that it can export XML files destined for an SQL server. Conveniently the application is written in C# and I am just beginning to learn XML so this book was eagerly awaited. To say this book does exactly what it says on the cover (Beginning C# XML - Essential skills for C# programmers) is spot on. Upon opening the package, I immediately read the first two chapters ('Why use XML with C#?' and 'Overview of XML'). Over the next couple of evenings I devoured the rest of the book typing in the examples where I felt them necessary.

The speed at which I read the book highlights several factors. Firstly, I was extremely keen to learn XML. Secondly, this book was exactly what I needed. Thirdly, this is a very well written book. I found the explanations very easy to understand and the examples were short enough to actually type in - more on that in a minute! As I am relatively new to C# and have never before used XML I cannot vouch for the authors technical validity or experience but the book provided enough advice to get my application up and running quickly and reliably.

As well as the XML format the book also covers reading and writing XML and various acronyms including DOM, XSLT, XML Schema and XPath. The book also addresses XML in ADO.net and web services. At the end of the book is a case study for a simple news portal.

Now on to the source code I hinted at earlier. As I said, most of the code was very short and not too much trouble to type in. I felt it best to get the source code anyway so duly went to the web site highlighted on the front of the book,

. Instead of a Wrox-owned web site, I was confronted with a search engine. Undeterred I tried the web site on the back of the book, . Not even found. Finally, I went to but there was no mention of the book anywhere. After 10 minutes of searching, I finally found a little FAQ that explained that Wrox had recently gone bankrupt and sold a load of titles to Apress ( ), which is where I finally found the source code. Given the high quality of the book this was extremely frustrating, but obviously, the book was printed before the company's troubles. [However the actual Wrox imprint was sold to Wiley& Sons. Francis]