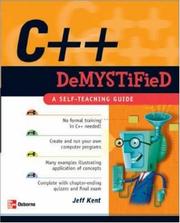 This book advertised itself as 'simple enough for a beginner, but challenging enough for an advanced student'. I would grudgingly agree on the former, but strongly disagree with the latter.

The author is strong on explanation, writing in a rather chatty and jokey style. I suppose this might be useful for readers who like the technical input leavened slightly. I found it irritating.

After a little investigation, it turned out that this was in-fact a book on C, with a little bit of C++ thrown in. For example, using cout rather than printf for terminal output. However, the word class only appears in a 'what to study next' chapter at the end. I think that this is a fatal weakness. I have no idea how a reader could be expected to understand a description of the ofstream functionality, without knowing about methods or classes.

Another criticism that I have is that the author expects the user to have Visual Studio available. Although he says that alternatives are available, it might have been nice if he had recommended one or two, or even just gave a URL for download.

Some examples will not compile, including this one that I found slightly amusing:

The following...are different in syntax, but identical in effect:


Yup, both fail to compile on my system too.

There are a number of other problems, including: no coding exercises; 'rules' which are given on one page and broken on the next; leaving function parameters as unnamed because the names 'serve no purpose'.

To end on a more positive note, there were some areas that were not badly covered (e.g. dangers of cin where a user might type a character when a number is expected). However, this does not make up for the inadequacies of the remainder of the book. Not recommended.