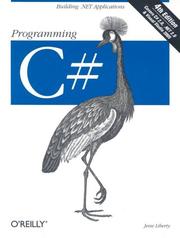 This is the 4th edition of this book, and covers C# 2.0, .NET 2.0, and Visual Studio 2005. I originally bought the book late last year when I was trying to persuade .NET Windows Form to do anything other than produce programs which were database clients (I failed, incidentally). Having discovered that a week long visit to the dentist was probably less painful than using C++ to program .NET, I decided to learn C#, and bought this book to do so.

I found the book frustrating. Yes, all the syntax is there, so are simple examples, and it's impressively heavy, but there is something missing. It took me quite a while to figure out what it was that was missing. If you want it in eastern mystic terms, the Tao of C# was missing. By that I mean it didn't really explain how to think in C# terms - how to build your program in a C# compatible way so that you weren't distorting C# usage to make it fit into a concept more appropriate to another language.

The failure is all the more severe because the book advertises itself as being for experienced professionals wanting to get up to speed in C#. These are exactly the sort of people who would need the conceptual information far more than an eight page explanation of how to do loops in C#.

The book would probably be OK for someone starting out to learn C# as their first language, although even then I'm not sure. And, come to think of it, I don't recall ever hearing of anyone who didn't learn C# as a second or subsequent language!

Not recommended, although, to be fair, I was unable to find a C# book that I would recommend.