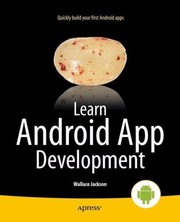 I have quite a number of issues with this rather weighty tome. It's not that it’s badly written; it isn’t. It’s not that it’s too short; at 507 pages that accusation can’t be levelled against it. The problem is that it doesn’t actually do what it says it does.

The pace is slow and there is remarkably very little in the way of code in there. Sure it goes into XML and spends chapter 1 in setting up the IDE (which you know is a personal bug bear of mine), but it then starts spending a stack load of time on using GIMP, Audacity and a pile of other applications that while they are good for chopping audio and editing images, really hasn’t anything to do with app development.

If you chop out the sections that are peripheral to development or really don’t have anything to do with development, you end up with a fairly good book that gives a reasonable coverage to app development – nothing too in-depth, but not too scant.

There are much better books out there for app development. This one is a set aside and leave.